SMS: How are credits calculated

When you’re sending and receiving text messages to/from your candidates, you will be charged in credits. In this article, you can learn all about how credits are calculated.

Whenever you send an SMS to a candidate, you will see a character counter in the bottom right of the message creator. This means there will be no surprises in the credit transactions from your account. 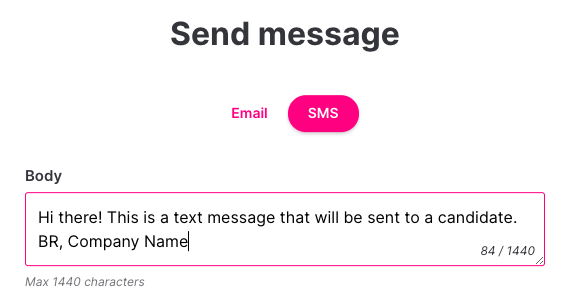 But let’s look in to the details on characters and credit are counted.

We charge you 1 credit per incoming and outgoing SMS. How one SMS is calculated depends on the number/type of characters, and other factors as what country you text, and how many the SMS is sent to. Let’s look in to some specifics.

All characters added to your text message is using one of the following encodings: 7-bit or Unicode. When using 7-bit, you are allowed to use 160 characters in one SMS, and when using Unicode this is limited to 70 characters.

7-bit encoding is the most commonly used encoding for messages. The set includes all the English lowercase letters (a-z), uppercase letters (A-Z), and numbers from 0 to 9, as well as the following characters:

In addition, you can use the following characters that will be used for the cost of two characters (since they are prepending by the escape character ESC):

The message length for 7bit encoding is up to 160 characters.

When your message exceeds the character limit of 160 characters (7bit encoding) or 70 characters (UCS-2 encoding), the message is split up in multiple SMS. When this happens, the allowed characters per SMS is a bit shortened (this is to make sure the multipart SMS is delivered in a good way to the receiver). The length of the 7-bit message is shortened to 153 characters, and the Unicode message is reduced to 67 characters.

One entire text message can contain up to 1600 characters in total, and will be charged several credits.

When you’re sending bulk messages to candidates, you are legally entitles to include the option to out out of any further messages. This is therefore automatically added to the end of the first bulk message sent to the specific candidate. This characters are included in the total amount of characters per SMS. 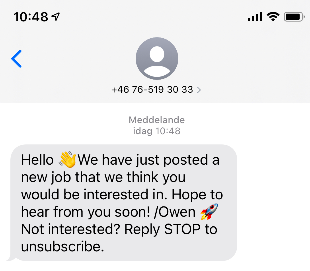 You can learn more about the opt out message functionally here.

Some countries have a dedicated phone number for SMS services and for the candidate to be able to reply, a specific phone number to reply is added. This will also be added to the total amount of characters per SMS. This message will look something like this ↓ 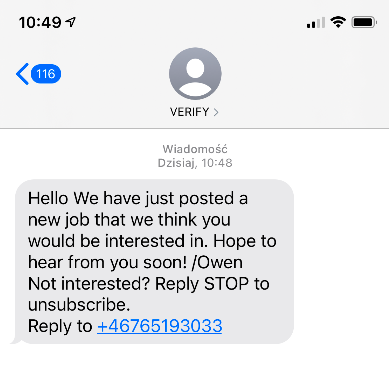