Get an overview of how your recruiting is going

In the Recruitment report, you can get insight in relevant information regarding your recruiting work. The more data, the better the decision making, right? 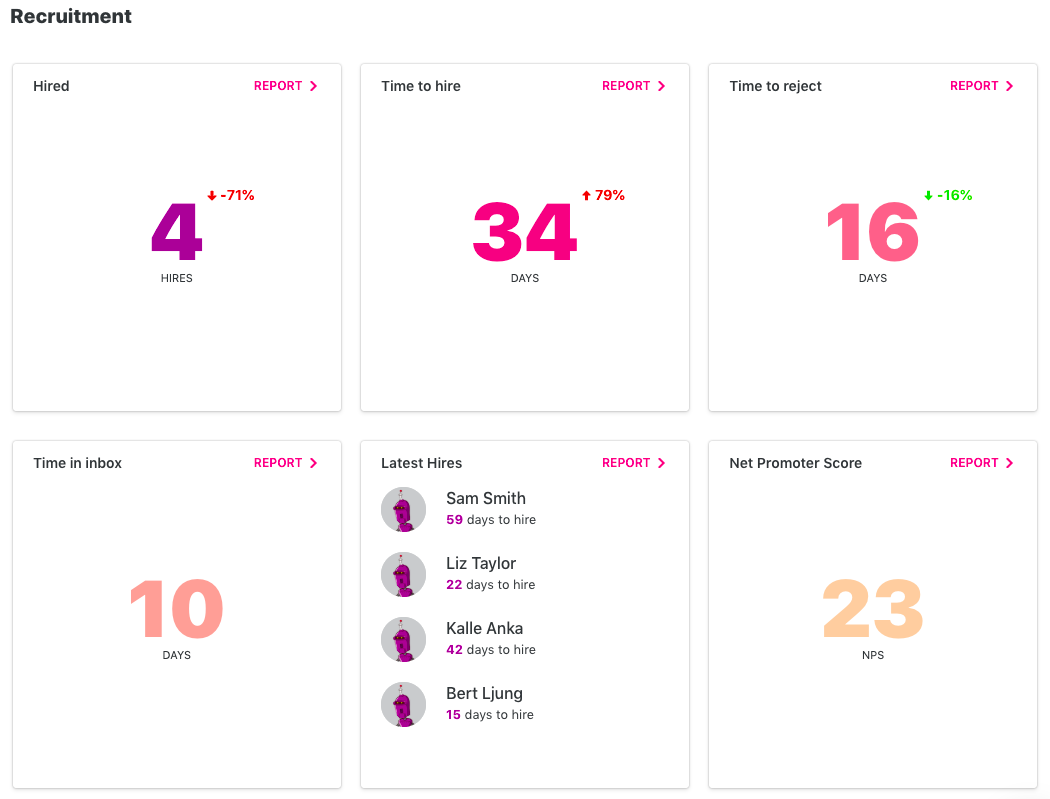 Hired - the number of candidates hired during the period. Click it for more insight on your hires, from which job to how long the recruitment took.

Time to hire - the average times it took you to hire your new colleagues (from when they landed in the inbox until you moved them to hired).

Time to reject - on average, how long it took you to reject your candidates (from when the application was submitted, until you rejected them).

Time in inbox - follow up how many days your candidates are in inbox before they are handled and moved along in the process.

Net Promoter Score - see what your NPS score is for the period you're currently looking at.

By clicking on the different boxes, you will be directed to more detailed reports. Let's take a closer look at these below.

See how many candidates you've hired over the period you're viewing, and some other related stats. 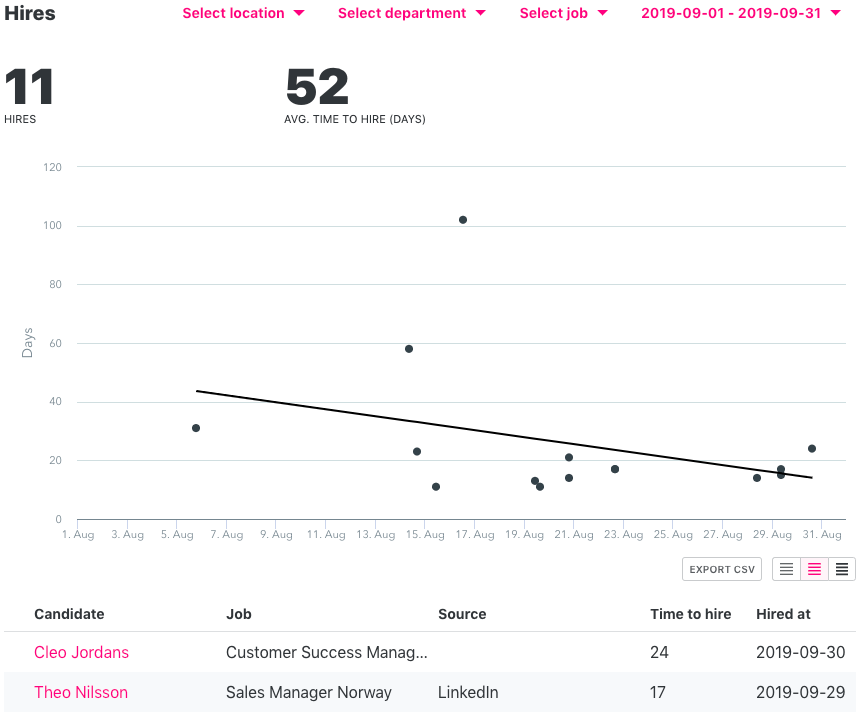 Job - displays the job the hire was made for

Hired at - The date the candidate's profile was moved to Hired

When it comes to recruiting, time is absolutely of the essence. Pipeline speed gives you an overview of the time spent on every step of the recruitment process. Use this data to identify bottlenecks, and ensure your recruitment process is as efficient as possible.

Days until hired - see the average time it took you to hire a candidate (from when the candidate submitted the application, until s/he was moved to the stage Hired). 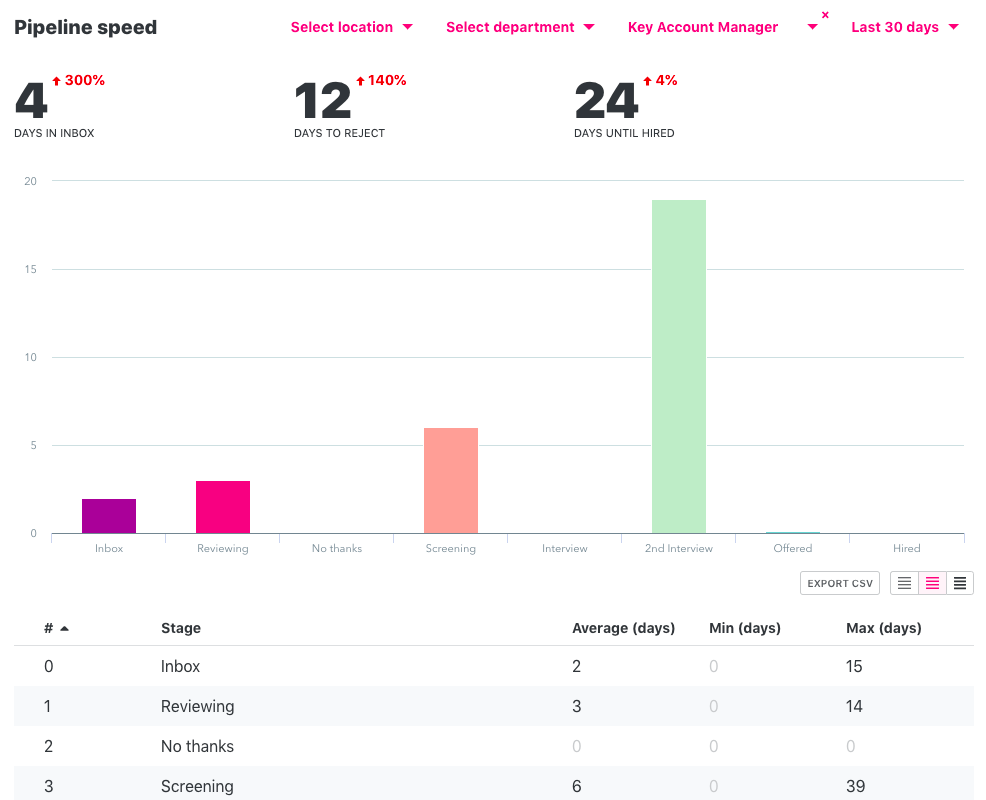 You see a more detailed reporting of the pipeline's speed below the reports table, displayed per stage you've set up in the process.

#️⃣ - shows which number the stage has in the process.

Stage - here, see the name of the stage.

Applied - How many candidates applied to the job/jobs during the reflected time.

Sourced - How many candidates where manually added (sourced) into the job.

New in process - This number shows how many candidates that were moved into the recruitment process, so from the stage Inbox and forward.

Hired - The number of candidates moved to the Hired stage.

Rejected - Shows how many candidates you rejected during the period.

You can see a detailed pipeline overview, divided by the different stages you've set up in the process.

#️⃣ - the number sign/ID shows which number the stage has in the process.

Stages - here, see the name of the stage

Note! Each row in the report displays a unique stage (so a specific combination of # and name).

Why is my stage displayed twice?

If you see the same stage several times in this report, it might be because you have either renamed the stage, or moved the stage forward/backwards in the process during the time period you're currently viewing.

If the stage "2nd interview" is renamed to "second interview", this will result in two lines in the period. However, once you're looking at a period after the stage update, only one line is displayed.

Get a full overview of all your NPS scores and feedback. This is a great place to work with your NPS and get back to your candidates. 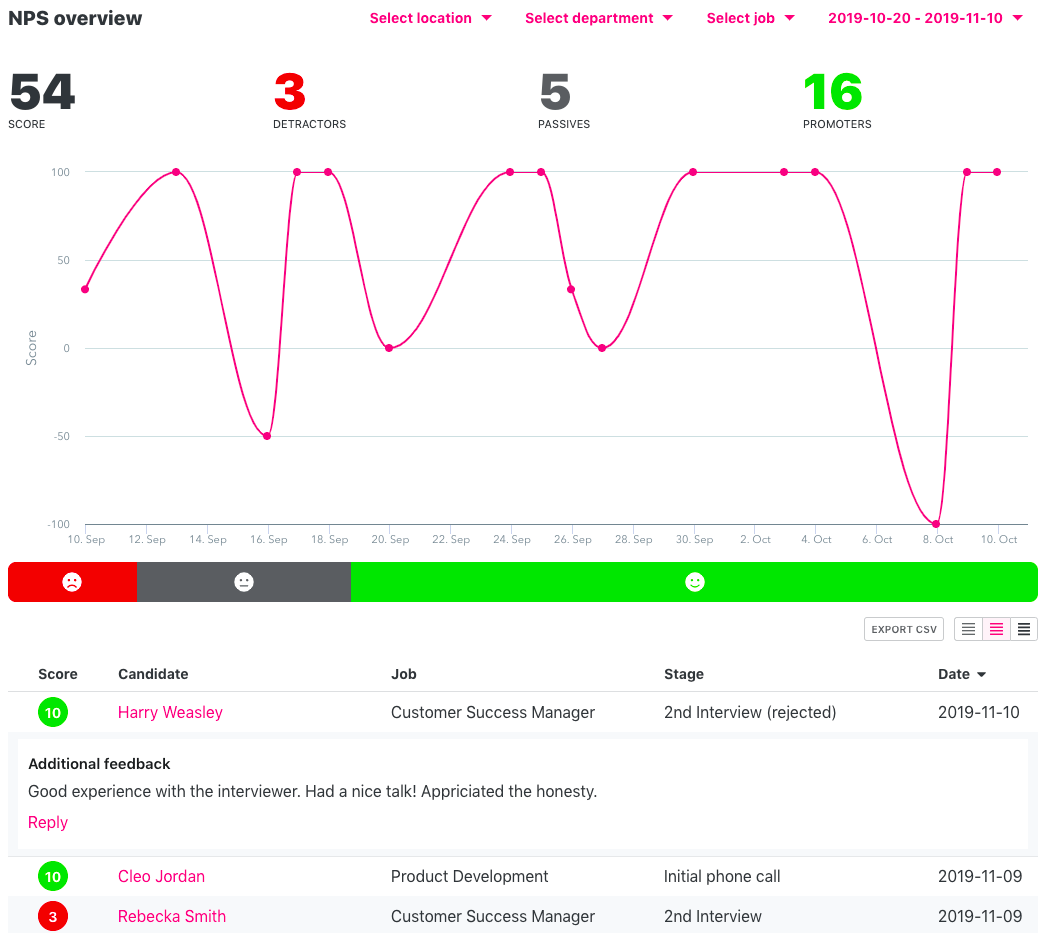 You can see the NPS score divided by the individual answer, to get more deeper insights.

Score - see the score the candidate in question give. The colour represents if this candidate is a promoter (green), passive (gray), or detractor (red).

Candidate - the candidate that gave this score

Job - the job the candidate in question was asked to rate

Date - the date the answer was recorded.

See the NPS score divided by the stage the candidate was in when they answered your survey. Why not use this information to analyse the correlation between different stages and the responses your candidates give you? 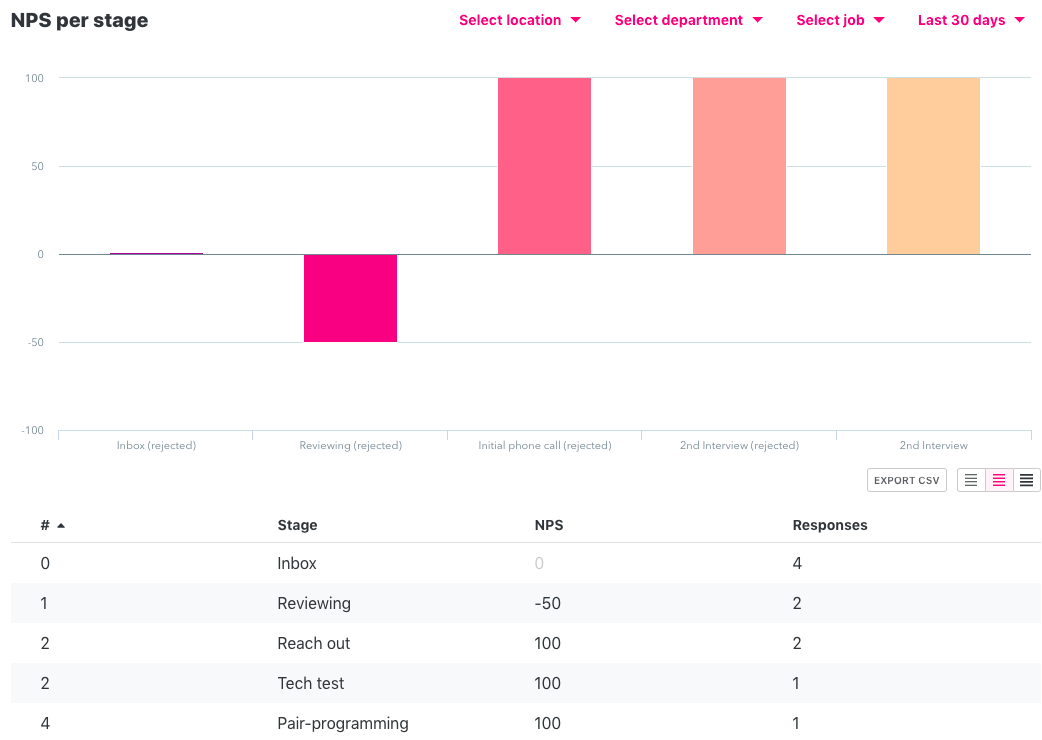 #️⃣ - the number sign/ID shows which number the stage has in the process.

Stages - here, see the name of the stage

NPS - the average NPS score from this stage

Responses - the number of responses you've received in this stage

Get an overview of the active recruitments during the period you're viewing by taking a look at the Jobs overview report. In this report you see the statistics on:

Avg. Visits/Job - the average amount of visits per job

Avg. Applications/Job - the average amount of applications per job

You will also get the following insight into every specific job:

Job - the name of the specific job

Visits - the numbers of visitors to the job ad

Sources -  the number of candidates you've sourced to the ad

Candidates - the total number of candidates (applied+sourced) in the job right now. Won't show candidates that where deleted. A list of these candidates will fold out if you click the number.

Avg. rating - the average rating of the candidates in the job

In this report, you can get a breakdown of the reasons candidates were rejected. 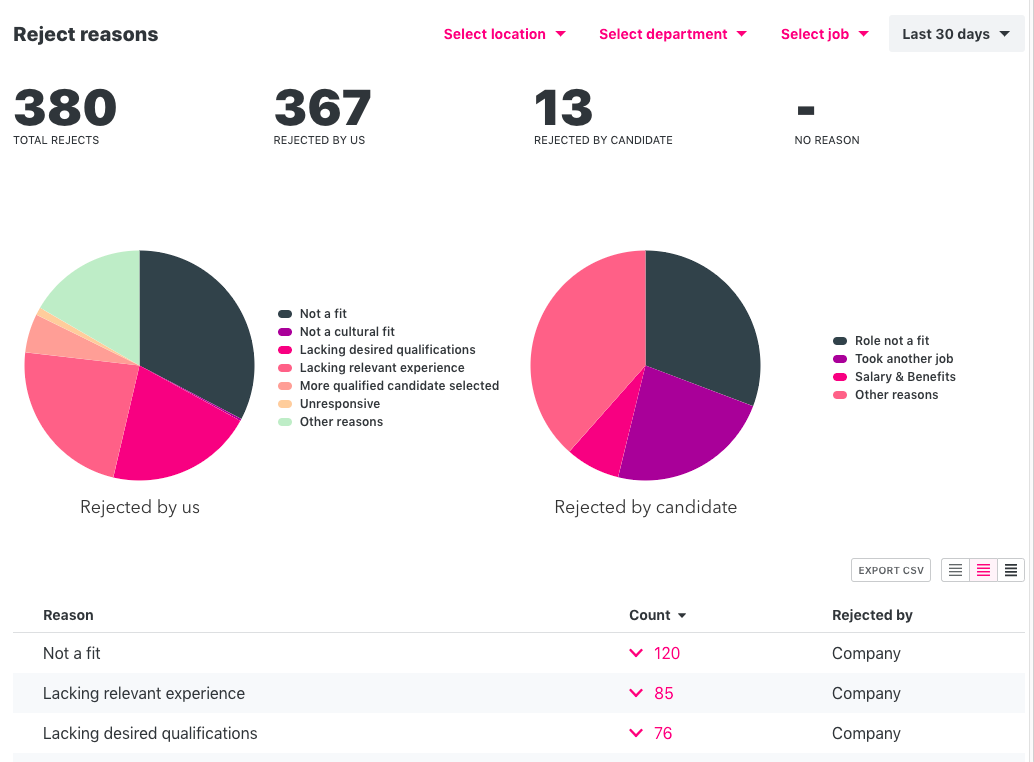 You can also get statistics based on each specific reject reason you've set up for your account.

Reason - the reject reason in question

If you work with one of our integrated partners for candidate assessments, you will see a report for Assessment results. 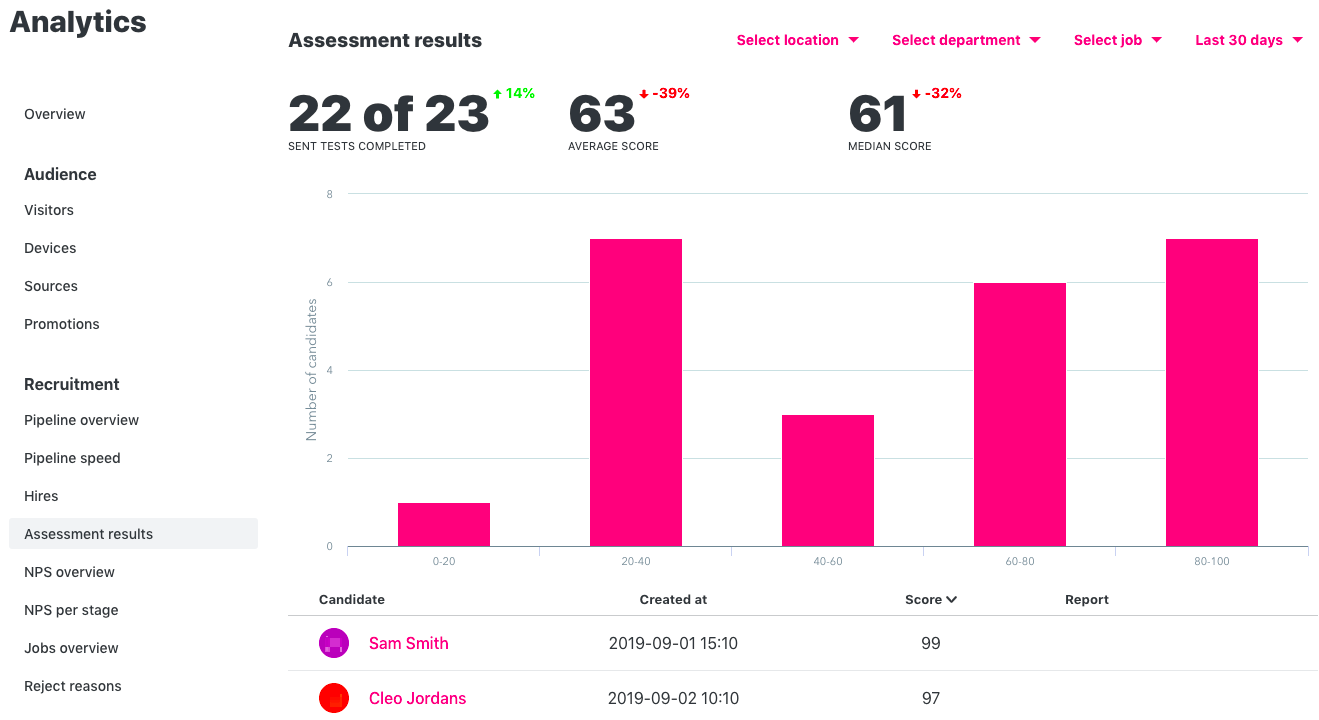 You will also get the following insight into each specific test result.

Candidate - the candidate that submitted the result

Created at - when the result was completed